Skip to content
Posted by Silvia Liu on 1 August 2019

Year on year, this reflects a decline in property prices across capital cities and a slight decline for houses nationwide. Further price breakdowns can be found here.

According to SQM Research, the national residential vacancy rate increased from 2.2% in May to 2.3% in June. This is identical to the vacancy rate in June last year, even though there has been an increase in vacant dwellings in the last 12 months.

Notably, Sydney’s vacancy rate of 3.5% is the highest it has been since 2005. This reflects a 0.2% increase compared to the month prior. In contrast, Hobart maintained the lowest vacancy rate nationwide at 0.5%. Further vacancy rate breakdowns can be found here.

Managing Director of SQM Research Louis Christopher said “The increase in rental vacancies in June tends to be a seasonal rise for the start of winter however Sydney’s increases goes beyond seasonal factors and so our expectation remains that Sydney will reach a 4% vacancy rate before 2019 is completed.”

For the week ending 29 July 2019, preliminary auction clearance rates rose to 71.2% due to a higher volume of properties being taken to auction. This shows a vast improvement compared to the same time last year, where only 50 to 55% of homes were sold at auction.

The Reserve Bank of Australia (RBA) lowered the cash rate by 25 basis points to a record low of 1% in early July to support employment growth and stimulate the economy. 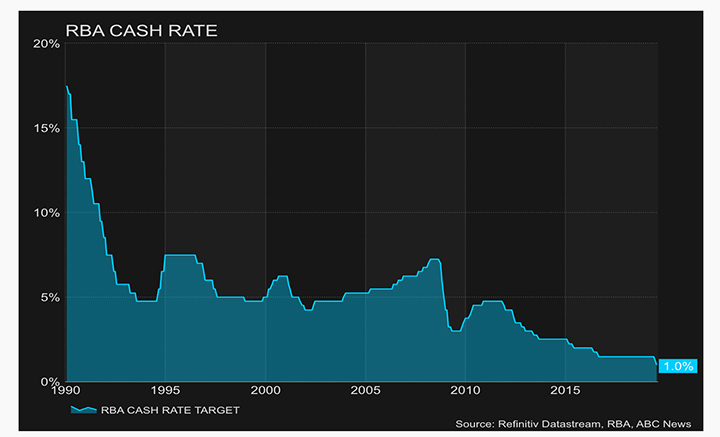 Source: ABC News
Westpac Chief Economist Bill Evans predicts that the cash rate may even be cut to 0.5% in subsequent months to faciliate long term economic growth after the housing downturn.

The Australia Bureau of Statistics (ABS) recently published a study showing a declining rate of home ownership across a 20 year period from 1997/8 through to 2017/8. Their data showed that the proportion of homeowners decreased from 70% to 66% while renters increased from 27% to 32% over the same time period.

Hopefully you enjoyed this July Property Market Update. Be sure to subscribe to our Monthly Insider below to receive email updates.

You might also be interested in the June Property Market Update and The Ultimate Guide to Leasing in a Slow Market.

Did we miss anything in this July Property Market Update? Email us at [email protected] to let us know.